Oops…I Didn’t Expect This! Responding to a Breakdown 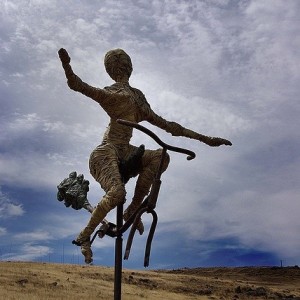 This is the second post in the Leadership: Just Like Riding a Bike series. The first post addressed preparation; the next will focus on an embodied and empowered response to a breakdown.

One insight after another revealed itself during this relatively short yet sublime ride. This was one of those times when many forces gathered to gift me much more than I expected.

After a thorough preparation for my first solo ride (see “…Preparing to go Solo), I set off. My route would take me from my Far North Dallas neighborhood to just south of White Rock Lake. Soon after joining up with the bike trail, signs of our epic rainfall were apparent: trail diversions, downed trees, standing water, silt on the path. Debris trapped in railings and fences marked where the creek had rushed over its banks and across bridges and tennis courts. The foliage was lush and the air was heavy with humidity.

I reached my halfway point, sweaty, dirty and proud. I stopped to take a selfie with my now slightly dirty bike, check my blood sugar and take in a little snack and some water. Things were going great – my plan was working perfectly!

Humans plan, God laughs. I had just started my trek back when the skies opened up and the rain came down. Hard. Well this was unexpected, I said to myself. And immediately the Responsible Voice in my head replied sarcastically, Oh really? I then admitted, Ok well, I think I remember hearing something about a chance of rain today… Responsible Voice says with a bit more edge, And hasn’t it rained most every weekend for the past six weeks?  Me: Yep. Well, here we are. How will we respond?

A vignette from days past appeared out of nowhere. I was attending a workshop, “The Oz Principle Accountability Training”. The instructors had paired us up and asked us to share a recent story where we experienced an outcome we didn’t think we deserved – where we felt like a victim of circumstances. My partner was explaining that he had just received a ticket for speeding in a school zone, which he didn’t deserve.

We were then invited to share signs we may have missed that led to our unfortunate situation. My colleague conceded, “I did see these big yellow stripes painted on the street but I had no idea what they meant. I’m new here!”  We both burst out laughing. Sometimes we need assistance in holding our Swiss cheese victim stories up to the light so we can see the holes in them. Humor, humility and honesty make learning and problem resolution possible at times like this. My learning partner smirked and opened to the next round of examination. I have conveniently forgotten my story.

So now what? I was at a choice point: I could be fearful and angry about my predicament or roll with it. I chose to roll. I became immersed in the adventure of cycling in a downpour. I was enlivened by the challenge and my senses were heightened to a level that felt almost surreal. An unspectacular ride and other cyclists on the trail were transformed into an expedition and fellow adventurers.

In the book, The Power of TED: The Empowerment Dynamic, author David Emerald introduces a model that describes mindset orientations: FISBE. FISBE is an acronym for Focus, Inner State and Behavior. Focus on a problem and you’ll become anxious or worried which leads to reactive behaviors and unsustainable results. Alternately, focus on an outcome or opportunity and you’ll be filled with passion and excitement and take positive actions toward your goals. The former results in a vicious cycle while the latter results in a virtuous one. We can see ourselves as victims or creators.

Choosing adventure and challenge changed everything for me that day.

Where might you be seeing yourself as a victim, as not responsible? What signals have you missed or ignored? Are there signs in your environment right now that you are ignoring?

Are you aware when you are in a victim mindset? What do you say to yourself? (Clues: I can’t help it! I have no choice but to…. How could I have known? They should have told me… Here we go again! It’s [someone else’s] fault… )

Can you reframe your victim story to one where you author the outcome you want and see it as a challenge? You may not be able to avoid a situation but you can choose how you respond.

What does a gracious (not groveling) acceptance of accountability sound and feel like for you?

How are you coaching and preparing your team on how to be nimble in the face of unforeseen circumstances? A leader has ultimate responsibility, or culpability for her/his team’s performance and response to breakdowns. “Mea culpa” translates to “I am culpable” and has closer ties to being responsible than to being guilty.

Workshops focused on TED* The Empowerment Dynamic are always popular in my organizational work. The TED model is one of the ‘stickiest’ and relatable models I have found and is accessible to all levels of employee.